Repair and Open PPTX File in PowerPoint 2007 and Other Versions 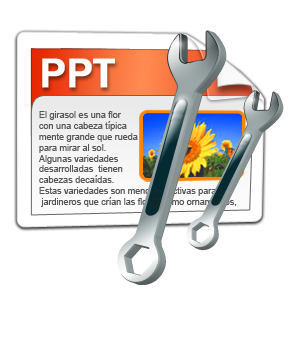 MS PowerPoint is a very useful application. It helps you to create presentation files and offers facilities like word processing, outlining, graphing, drawing, and presentation management tools and various other things. A PowerPoint file comprises several slides in it. Microsoft has released various versions of this useful program, among them PowerPoint 2007 is one of the famous versions. PowerPoint 2007 has lot of incredible features and comparatively this version is very easy to use. The presentation files that are created on this fabulous tool take the extension as PPTX, whereas earlier versions were to take PPT as their file extension.

Well, do you know that sometimes these PPTX files refuse to open on PowerPoint 2007 program? Yes, it’s very common. You will come across such type of errors when PPTX files get corrupt and unless they are repaired you will not be able to open them. Now, the question is how to repair PowerPoint file that is refusing to open in PowerPoint 2007? To fix PowerPoint 2016 not opening PPTX files, you have to utilize a powerful repair application. There are number of repair applications available, which can be used to fix and open PPTX files on PowerPoint 2007. However, the most advanced application is Remo Repair PowerPoint software. It’s a most preferred repair utility, designed by experts in the field. With the help of this app, you can repair severely damaged PPTX files with utmost ease and that too in an efficient manner. The repairing process employed by this tool is entirely unique, it in fact doesn’t modifies the original file PPTX file, rather it just reads your original file and then it creates a similar PPTX file which you can open on PowerPoint 2007 and recover all its content. Therefore, it’s a safest repair utility on which you could rely, if you cannot open PPTX file due to severe corruption.

Remo Repair PowerPoint is most trusted application, which is absolutely free from various harmful elements such as spiteful programs and viruses. It has been designed with a simple user interface, which allows even an inexperienced person to repair and open PPTX files on MS PowerPoint 2007. This powerful application can be used on all latest versions of Windows operating systems including Windows 8, Win 7, Windows Vista, Windows XP, Windows 2003 and Windows 2008. With the aid of this app, you can repair PPT and PPS files as well. Remo Repair PowerPoint app is capable of repairing the presentation files created on different versions of PowerPoint utility including MS PowerPoint 2000, 2003, 2010, 2013, 2016, etc. It can repair PPTX files on various types of secondary storage devices including flash drives, external hard drives, FireWire drives, memory sticks, memory cards, etc. Within a very short time frame, it repairs corrupted or damaged PPTX files and allows you to access them on PowerPoint 2007. Prior to purchase, you can test the product using its demo version. If you feel it works as per your requirement then get its licensed version.

Step 1: Download demo version of Remo Repair software from the website. Install the application to your Windows desktop / laptop computer. Follow the procedures displayed on the main screen. Select your damaged / corrupt PPT file which is to be repaired. Click on “Repair” button to start the repair process. 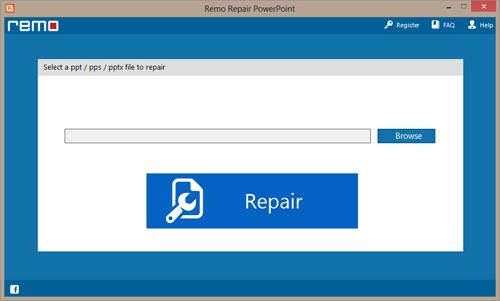 Step 2: The repair process can be monitored by looking at the progress bar. 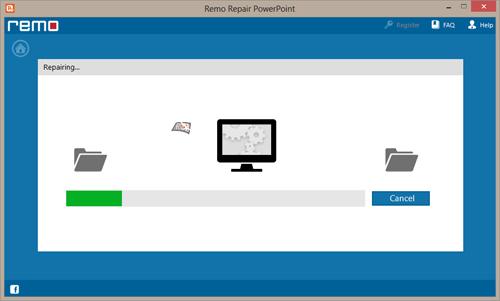 Step 3: After completion of repair process, a confirmation message indicating success will be displayed on the main screen. Preview the PowerPoint file using “Preview” option. 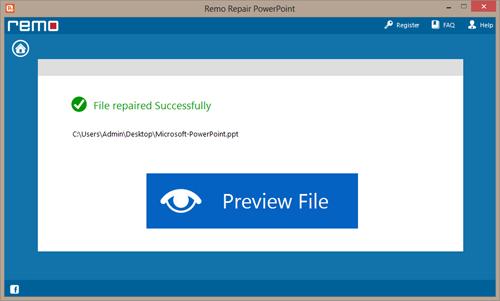 Step 4: Finally save the repaired PPTX file to your desired destination location. 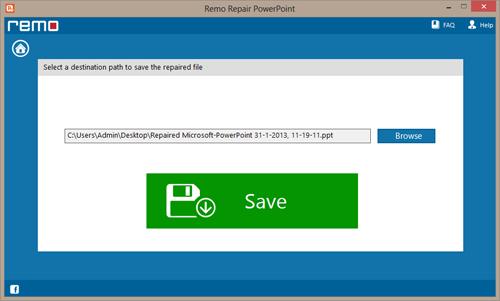